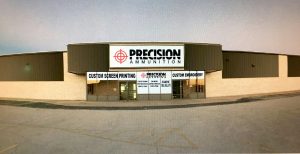 Precision designed and built their own state of the art proprietary ammunition mills, brass cases, powder and projectiles. The company stands out among ammunition manufacturers because while many other smaller ammunition companies simply load and assemble “off the shelf” components made by other companies, Precision Ammunition utilizes their own Precision loading mills in concert with their high grade Precision components that are matched to each other with formulas derived from extensive ballistics testing in all of their calibers and configurations. Precision does this to achieve performance that was previously unattainable through standard components, formulas and loading methods.

The fact that the company is named “Precision” is no accident, because above all, what separates the company’s ammunition from that made by other companies is accuracy; large ammunition companies have sought Campbell’s advice on how to improve the accuracy of their rounds, and have tried to hire him to improve the quality of their product lines. At the same time, competitive shooters around the world have switched to shooting with Precision because of how it improves their performance.

For more information about Precision Ammunition, please contact us via info@precisionammunition.com or (940) 765-3200