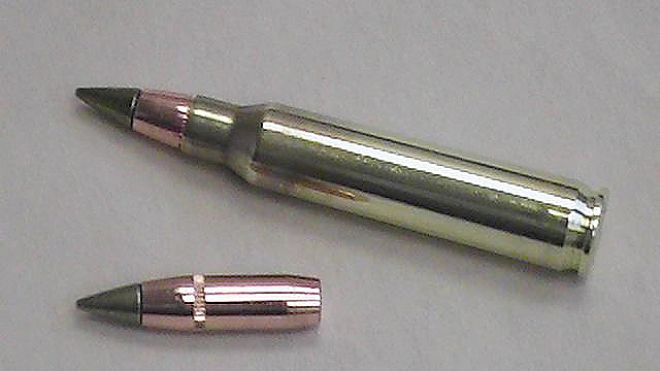 The Army’s new round replaces the current M855 5.56mm cartridge that has been used by U.S. troops since the early 1980s. The Army claims the M855A1 is more dependable, a more consistent performer, improves accuracy, moves faster. (U.S. ARMY)

When the last bullet-producing lead smelter closes its doors on Dec. 31, it will mark a major victory for those who say lead-based ammunition pollutes the environment, but others warn ‘green’ bullets will cost more, drive up copper prices and do little to help conservation.

The bid to ban lead bullets, seen by some as harmful to the environment, started slowly more than a decade ago. But with two dozen states, including California, banning bullets made of the soft, heavy metal, the lead bullet’s epitaph was already being written when the federal government finished it off.

First, the military announced plans to phase out lead bullets by 2018.

“Whatever the EPA’s motivation when creating the new lead air quality standard, increasingly restrictive regulation of lead is likely to affect the production and cost of traditional ammunition.”

Whether by state or federal regulation, or by market forces, lead bullets will be all but phased out within a few years in favor of so-called green bullets, experts say. While many believe that this will help the environment by keeping lead from contaminating groundwater, others say switching to copper-based bullets will cost hunters and sportsmen more and have little effect on the environment.

“Whatever the EPA’s motivation when creating the new lead air quality standard, increasingly restrictive regulation of lead is likely to affect the production and cost of traditional ammunition,” the National Rifle Association said in a statement

Critics of lead bullets say that in addition to lead finding its way into the water supply and food chain, people who handle ammunition have been found to have elevated levels of lead in their blood. Lead poisoning harms organs and tissues and can result in brain damage.

“Switching to nontoxic lead ammunition will save the lives of eagles, condors and thousands of other birds every year – and, importantly, will keep hunters and their families from being exposed to toxic lead,” the Center for Biological Diversity said in a statement after California Gov. Jerry Brown signed into law a phaseout of lead bullets for hunting by July 2019.

The Army has been researching a more environment-friendly bullet at the Picatinny Arsenal, in New Jersey, since 2010. A lead-free version of the 7.62-mm rounds fired from M-14 rifles will be issued to troops in 2014. That will follow a prior switch to a greener 5.56 mm “Enhanced Performance Round” the Army switched to in 2010..

“The EPR replaces the lead slug with a copper slug,” Lt. Col. Phil Clark, product manager for small-caliber ammunition at Picatinny, toldthe Daily Caller. “This makes the projectile environmentally friendly, while still giving soldiers the performance capabilities they need on the battlefield.”

The army has projected that use of green bullets for small-round ammunition could eliminate the purchase of nearly 4,000 metric tons of lead between now and 2018.

Jim Yardley a retired financial controller and blogger foramericanthinker.com, estimated it would cost $18,431,000 to replace the lead with copper.

“Nearly $20 million, not to improve the effectiveness of the ammunition used by our troops, but to protect the environment,” Yardley wrote.

In 2010, Doe Run settled with the EPA and state regulators for $65 million and a pledge to close the 120-year-old smelter by year’s end. Doe Run General Manager Gary Hughes said the company tried to bring its smelter into compliance so it could continue to produce lead products, but abandoned plans in 2012 due to federal regulations.

“We hoped to be building another such plant by now; however, constructing a full-scale plant, given other regulatory compliance spending requirements, puts our company at financial risk,” he said.

It is unclear if another company will open a new lead smelter in the U.S. that can meet the more stringent air quality standards. But with the biggest buyer of ammo switching to copper-core, “green” bullets, and the number of state bans on lead bullets growing, ammunition makers are adapting. One such company is Florida-based Liberty Ammunition, which has ramped up production of green bullets by adding a second production shift.

“Copper is not cheap,” said Matthew Phillips, Liberty’s vice president of sales and marketing. “Luckily, we’ve managed to find a way to keep the cost down.”

Copper bullets have a similar pricepoint to high-end lead bullets, but can be as much as twice the cost of lower-end lead bullets, say experts. And diverting copper for bullet manufacturing could have other unintended economic consequences, critics warn.

“This will inevitably increase the cost of electronic devices that use copper,” wrote Yardley.”It will add to the cost of a wiring a new home, having an adverse impact on the housing industry.”

“The Treasury Department already wants to discontinue the penny due to the cost of producing it. A rising cost of copper will only add impetus to that, and might encourage them to repeat the response to a copper shortage during WWII, and produce pennies from steel.”

We are finalizing a contract to manufacture MILLIONS of .22LR 40 Grain Copper...